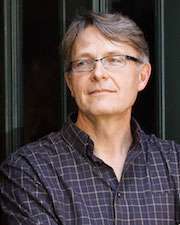 The Burlington Business Association (BBA) has appointed Richard Deane of TruexCullins Architecture as the new Chair of the Board of Directors. Richard Deane officially took over the seat of Chair last month at the BBA’s 37th annual dinner celebration with the ceremonial handing over of the gavel by retiring Chair, Tom Brassard. Brassard served a two year term as Chair from 2013 to 2015 and will maintain a seat on the BBA board and serve as Board Secretary.

Richard Deane has been a Principal at TruexCullins since 2002 and leads the Higher Education and Workplace Studios at the architecture and interior design firm of 28 people. Richard attended Syracuse University School of Architecture, studied in Italy, interned and practiced as an architect in Washington, DC and lived and worked in Frankfurt, Germany prior to returning to his hometown of Burlington in 1997. When asked about his new role with BBA, Deane said, “I am looking forward to working together with BBA’s talented, passionate and creative Executive Director, Kelly Devine, a dedicated BBA Board of Directors, and all the participating business members of BBA who take to heart and live BBA’s mission to promote the economic vitality of this special city by the lake.”

Deane spoke candidly about the work of BBA and the changes he has seen in Burlington, “As someone who grew up in Burlington and attended Burlington’s public schools, I have directly benefitted from the educational, cultural and community resources that this city provides. I have experienced the transformation that brought the Church Street Marketplace to life, ridden my bike along a new lakeside bike path, and taken pride in the revitalization of the Flynn Theater and the Waterfront – visionary projects that have benefitted all of us.These initiatives required bold imagination, drive and dedication to accomplish. The business community, our elected leaders, civic minded community members and the community as a whole supported the change needed to make them happen.” He added, “As an architect I know that a city never ‘is’ – it is always in the process of ‘becoming”.

“Richard Deane as Chair of our Board of Directors continues a nearly 40-year tradition of the BBA’s working with a member of the TruexCullins team. Richard brings to this role the combination of local and regional business experience, an embracing of the Burlington community, and roots as a longtime resident who has returned to Burlington,” said Kelly Devine. “He is the right leader for this next phase of Burlington and the BBA’s evolution.”