Mayor Weinberger announced Monday that Moody’s Investors Services has upgraded the City of Burlington’s credit rating two steps from “A2” to “Aa3”. This is the first time in 10 years the City has received a Double A rating.  From 2009 to 2012 the City was downgraded multiple times, eventually falling to just one step above junk bond status at “Baa3”.

The BBA’s Chair of the Board, Shireen Hart, was there alongside city officials and community leaders. She spoke on the importance of this improvement credit rating to the business community as highlighted by Local 22/44. Hart said “Our Double A credit rating means the city is able to finance the necessary work to maintain and improve our city at lower borrowing rates; ultimately saving taxpayers money.”

The “Aa3” rating is Moody’s fourth-highest rating and translates to an issuer with high quality and very low credit risk. The rating agency cited a “growing and strong reserve position and very strong cash position” as the reason for the upgrade supported by an expanding tax base highlighting the city’s strength as the economic, higher education, and medical center of Vermont. The resolution of Burlington Telecom litigation was also mentioned as “ highlighting an experienced management team and eliminates significant financial risk.”

Full Statement from Shireen Hart, Chair of the Board:

The Burlington Businesses Association welcomes this continued improvement in the City’s credit rating. Moody’s has once again recognized the responsible fiscal stewardship of Burlington under the current administration. Our Double A credit rating means the city is able to finance the necessary work to maintain and improve our city at lower borrowing rates; ultimately saving taxpayers money. Much like a personal credit score of 750 or higher; this credit rating shows that Burlington is strong and poised to grow.

With this two-step upgrade to Double A the City can borrow more affordably, allowing taxpayer dollars to go further. City investment in new and improved roads and sidewalks, and much needed storm and lake water treatment for a cleaner lake will now be more affordable. This Double A credit rating also gives the city more options when developing projects on our waterfront like the Moran Plant, bike path and Greenway upgrades.

This news is encouraging to our business community and reason to celebrate, but, as Moody’s stated, Burlington faces continued challenges including a very tight labor market and limited affordable housing.

The BBA has long advocated growing the housing stock in our city and will continue to do so, especially following the City’s Housing Summit last month.

The BBA looks forward to working with Mayor Weinberger’s administration and city officials to address these challenges. We remain committed to helping Burlington thrive, and with this news from Moody’s the city is better poised to do so. 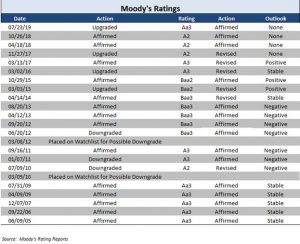