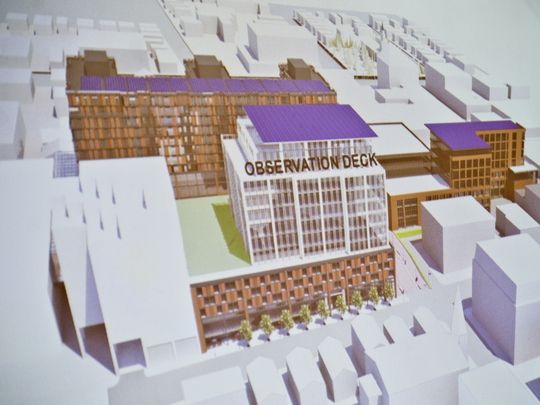 On Tuesday, January 5th a significant turnout of Burlington citizens, business owners and leaders attended a public presentation of the most recent plans for the re-development of the Burlington Town Center Mall.

The revised plans have changed since they were last shown to the public at a presentation in May, based on public input and review by city departments, with the most significant differences being the re-opening of St. Paul street as a city street, making it accessible to vehicular, pedestrian and bicycle traffic, and the removal of a rooftop park that was part of previous plans.

The expected economic impacts of the project are significant, with a tax revenues projected to be in the range of $4M annually, and sales tax revenues to be $7.5 M annually. Kelly Devine, Executive Director of the Burlington Business Association asked during the Q & A portion about how many jobs the project is expected to create. Sinex responded that at the peak of construction, 600 new jobs would be created and that upon project completion, the retail development would produce 1500-2000 new jobs downtown. 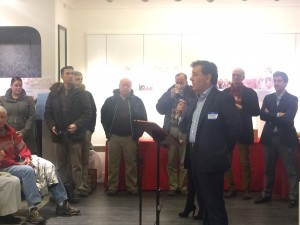 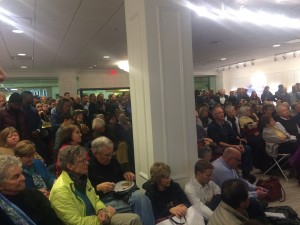 The re-construction of this St. Paul as a city street will increase connectivity from North to South, re-connecting Cherry and Bank streets.

According to the Burlington Free Press, “[Sherida] Paulsen [of PKSB Architects in New York City] explained the new plan stresses connectivity downtown, a priority for the city, and said the mall had “cut off north from south” in the city center. The restored St. Paul Street would include wide sidewalks, lighting and benches, with special pavers on the street to make it more inviting, Paulsen said. The solution to re-establishing connectivity is to “restore the downtown grid,” she said, with all the things you expect to see on a street.”

The Rooftop park has been replaced by an observation deck at the top of the office tower, which would be open to the public and afford spectacular views of Lake Champlain and the Adirondacks.

A 14- story residential tower on the Cherry Street side of the mall would include the majority of the proposed 274 housing units, 55 of which would be affordable under the city’s inclusionary zoning mandates, meaning they’ll be made available for people who earn 60% of the median income, or $25,000 annually.

Several individuals from the audience pre-empted questions by stating their support and excitement for the project, and the overall response to the plans was largely positive.

Sinex and his team will work with the city to draft a Development Agreement. The permitting process for the mall would include approvals from the City Council and the Development Review Board, along with a technical review by the Planning and Zoning Department. A TIF Authorization vote by the citizens of Burlington will be the final step in the process, which will award Tax Increment Financing (TIF) based on the projected revenues of the project. Sinex hopes to break ground in 2017, with construction happening in phases until completion.

Additional information can be found at https://www.burlingtonvt.gov/CEDO/BTV-Mall-Redevelopment-Process