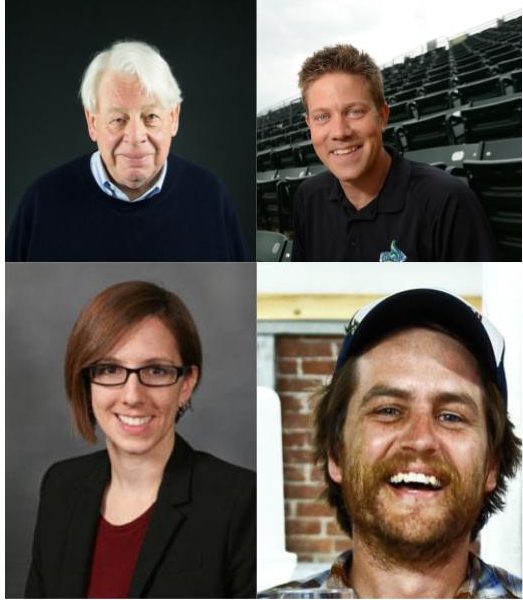 “These amazing additions to our Board of Directors will help support BBA’s mission of stewarding and promoting Burlington’s economic vitality”, stated Executive Director Kelly Devine. In representing a wide range of business types, they will help the BBA speak more strongly for Burlington.

Stephen Barraclough joined Burlington Telecom in March of 2010 as a consultant working for Dorman and Fawcett and was named Interim General Manager in September of that year. Stephen has held senior financial and operational positions across several industries, including Menswear Apparel Manufacturing in NY and NJ, CFO of a Media Company listed on the London Stock Exchange, and worldwide CFO for EMI Music based in NY. Prior to joining D&F in 2009 he led a number of acquisitions, integrations and operational and financial restructuring in Europe and the US.

Kyle Bostwick has worked in Minor League Baseball for over 20 years, starting with the Vermont Expos in 1994. Kyle previously served as General Manager of the Triple-A Ottawa Lynx. While there, the organization was named 2002 United Way Ottawa Small Business of the Year. Since Bostwick’s return to Vermont, the Lake Monsters have seen increases in attendance, overall revenue and community support, as well as earning the NY-PENN League Leo Pinckney Promotional Award in 2014. Bostwick also serves on the BBA’s Education Programs Sub-Committee.

Chelsea Condos is a seasoned tax accountant who returned to Vermont recently to work at Gallagher Flynn after spending 13 years at KPMG in Atlanta and Boston. Condos has extensive experience working with real estate companies, including developers, investment firms and construction companies. She holds undergraduate and graduate degrees in business administration/accounting with a specialty in tax accounting from Georgia State University. In addition to her role on the BBA’s Board of Directors, she is a member of AICPA and the Vermont Society of CPAs. She lives in the Mayfair neighborhood of South Burlington with her husband and two children, ages three and a half and one and a half.

A native of Illinois, Justin Heilenbach discovered cider making on small farm outside of Portland, Oregon. In 2010 he co-founded Citizen Cider with partners Brian Holmes and Kris Nelson. The growing company relocated to their current location on Pine Street in Burlington’s South End in April of 2014. The facility, which includes a tasting room and kitchen, has become popular destination for both locals and visitors. In six short years Citizen Cider has become one of the largest regional cider brands in the country and one of Vermont’s largest fruit buyers. In addition to his work with Citizen Cider, Justin is also on the board of the Flynn Theater, and a volunteer with Burlington American Little League. He currently resides in the South End with his wife Terra, and their three sons.

The BBA is a member organization made up of Burlington based businesses that advocates on behalf of Burlington’s business community. Our alliance of more than 260 diverse businesses shares the goal of stewarding and promoting Burlington’s economic vitality.