The BBA has been involved with trying to find a solution to the tough zoning regulations in Burlington since 2006 and now it’s time to get the community involved. After a decade of hard work, the City is now working on a new set of zoning regulations for the downtown and waterfront as recommended by PlanBTV-Downtown & Waterfront, known as form-based code. “Zoning code reform is critical to enhancing Burlington’s downtown vitality,” said BBA Executive Director, Kelly Devine. We encourage BBA members and the community to to participate in a panel discussion on Burlington-specific form-based code development standards in local land use regulations on January 13th in City Hall’s Contois Auditorium at 6:30pm.

What is form based code?

What Form-based codes do:

How form-based codes differ from other zoning codes:

Why use form-based codes in Burlington?

Currently, local regulations aren’t focused on the things we, as a city, care about most: What development looks like and how it fits into the existing fabric of the community. Burlington needs to do a better job of measuring what we want and communicating that to developers so that they can build it for us. In fact, the current regulatory process can make it extremely difficult to build in Burlington. The number one complaint that the city of Burlington receives in the permitting process is that the process is long and unpredictable with subjective and unclear requirements. Form-based codes would help alleviate these issues.

The City is looking to re-tool zoning and to facilitate infill within the scale and context of our existing downtown, activate street-scape for pedestrians, and reduce the number of cars downtown. Using form-based codes will make the regulatory process more predictable so that the type of development residents, city officials, and business owners want can actually get built.

Form-based code was recommended by PlanBTV Downtown & Waterfront with the goal of ensuring that these downtown sectors remain active and vital places for many years to come. The code will take advantage of opportunities for new infill and to develop underused sites in Burlington, and make regulations and the review process more predictable. 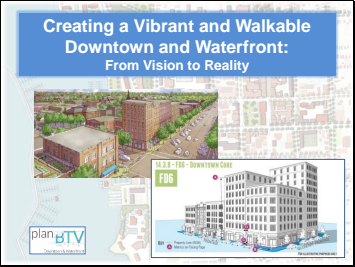 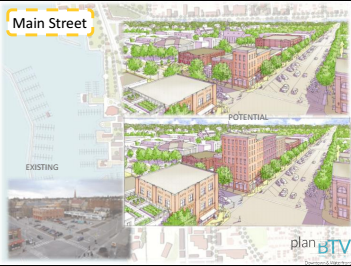