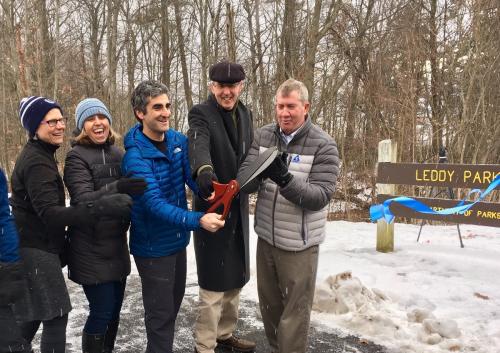 BBA’s Executive Director, Kelly Devine joined Mayor Miro Weinberger, and City officials and community leaders, to officially reopen the entire northern section of the Burlington Bike Path at Leddy Park the morning of Dec. 20th. Over three miles of the beloved Bike Path, from North Beach to the Winooski River Bridge, underwent major rehabilitation during the 2017 construction season. The entire Bike Path is now open for winter use. Because of the new pavement in the northern section of the Burlington Bike Path, this winter, for the first time, the Department of Parks, Recreation & Waterfront has updated its plowing policy and will be plowing the northern sections.

“Today, as the result of the hard work of the City, the support of our local business community and the generosity of many, our community gets to celebrate yet another upgrade to our beloved Bike Path,” said Burlington Business Association Executive Director Kelly Devine. “It is both an internationally known recreational amenity and a key to what makes Burlington an amazing city. I want to thank Mayor Weinberger, Councilor Wright, DPW Director Spencer, John Bossange, former Parks, Recreation & Waterfront Director Jesse Bridges, and the people of Burlington for their unwavering commitment to improving our bike path over the past six years.”