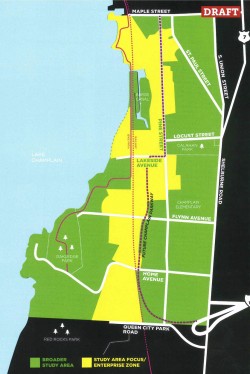 The BBA has been working with our South End Action Group to collect feedback on the PlanBTV South End draft plan. The SEAG has written a Plan BTV South End Feedback Letter which was sent on behalf of SEAG members to the City’s Department of Planning and Zoning office,  and published to the Plan BTV South End website.

With recent news of housing development in the old north end and the Mayor’s announcement that he will not support a plan for the South End that includes housing in the enterprise zone, Burlington is at a new crossroads in the housing debate. In his Op-Ed, published by the Burlington Free Press, Mayor Weinberger  states “the focus and concern about housing is distracting the much-needed, much broader discussion of the future of the South End. Thus, after listening carefully to this debate, I will not support a final plan that recommends adding housing as an allowable use in the Enterprise Zone.”

The development of new housing in Burlington remains a top priority for BBA, and we will continue to work with City Hall and the local business community to move forward on this topic. Over a series of meetings, the South End Action Group has discussed various aspects of the South End Draft Plan, including the importance of proposed improvements to infrastructure,  such as traffic calming initiatives and improvements to sidewalks and streetscapes that improve safety for pedestrians and bicyclists. Along with infrastructure improvements, the SEAG discussed Economic Development as a key aspect to be considered in the planning of the South End. Without adding housing to the enterprise zone, it is important to find other resources that will build the tax base and provide revenue to fund improvements. We will continue to be involved in discussions surrounding development in the South End, and welcome feedback from BBA members. Please contact Sarah O Donnell if you have comments, or would like to attend SEAG meetings.