Burlington’s City Hall Park will receive a make over thanks to a generous $500,000 donation from the Pomerleau Family. The donation will help the city complete a $2.5 to $3 million renovation of City Hall Park, which includes a new green space, children’s splash fountain, walkways and stage.

This project is important to Burlington because it serves as a gateway to the city, but currently the park is less than welcoming. The grass is patchy, trash litters the ground, and it serves people with no where else to go.  In 2014 former police chief, Michael Schirling said that his officers were responding frequently to the park and many residents reported feeling unsafe there.

The renovation of City Hall Park is a project the BBA has been advocating for in past years, helping to raise funds for the make over. The renovation will not only make the park a more welcoming and friendly place, but it has potential to be another landmark spot in Burlington. “The Burlington Business Association has long had a vision for City Hall Park as a smaller version of some of the best urban parks in the country, such as Bryant Park in New York City. Great cities have great downtown parks, and Burlington should too,” said Kelly Devine, Executive Director of the BBA.

The renovation project is the product of months of civic input, a project called Imagine City Hall Park. The new park will be an “invitation to immigrants and residents young and old to enjoy the best Burlington has to offer,” Burlington City Arts Executive Director, Doreen Kraft, told the Burlington Free Press. 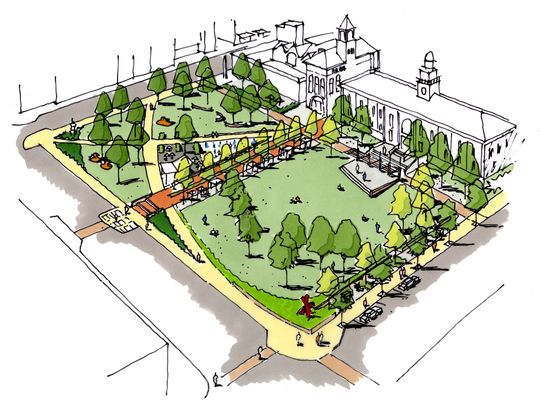 The target renovation date is 2017 and the $500,000 gift will be made to the City in installments of $100,000 per year, with the first payment to the City scheduled for January 2, 2016. The park reconstruction cost is estimated at $2.5 to $3 million, and the City will continue to undertake additional private fundraising efforts to cover some additional costs.